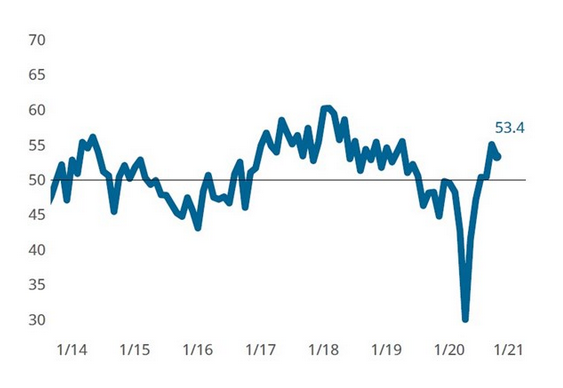 The Index was significantly supported by a sharp rise caused by slowing delivery speeds of input goods to manufacturers.  Expansionary support from production and employment activity will be difficult to sustain without the continued expansion of new orders activity

With reports of accelerating expansion over the past three months, the Moldmaking Index in October fell to 53.4, indicating slowing expansionary activity; removing the inflationary effect of slowing supplier delivery speeds, the Index delivered a smaller expansionary reading of 51.7. Readings above a level of 50 indicate expanding business activity. The further a reading is above 50 the more broadly that change in business activity is being observed as compared to the prior month.

October’s advancement came as a result of slowing supplier deliveries which inflates the overall Index reading, but represents a deceleration of the movement of goods. The delivery reading for this month was also the highest since COVID-19 was declared a National Emergency in the U.S.. Overall, the month’s combination of new orders, production and backlog data foreshadow additional concerns in the near future. For example, production set a new 12-month high for a second consecutive month; however, new orders activity fell nearly 9 points, creating a spread between the two that was reflected in contracting backlogs.

Despite the challenges set before the industry as it approaches the end of 2020, employment activity in October expanded for a third consecutive month, setting a new high—the last time that the Moldmaking Index reported three consecutive months of expanding employment activity was April of 2019. Whether this growth can hold will be highly dependent upon the continued expansion of new orders which have not been helped by export orders, and have been the weakest of all index components since 2017.